After a busy winter which included several trips to the U.S. for work it was nice to feel spring in the air.  I haven’t spent much time on Treylya during the past few months and have been mulling the idea of hauling her out of the water to redo the bottom paint.  Ryan, Deb’s son, is in University in Halifax and has a spring break in April so we decided to plan the haul-out during that time and fly him out to give me a hand to repaint the hull.  It’ll be a nice experience for Ryan, it’ll help me, and we’ll get to spend a little time building our friendship so it’s a win-win-win.

I booked Ryan’s ticket for April 25th and booked the haul out at Canoe Cove for April 26th and proceeded to make the arrangements and buy the supplies.  It’ll be nice to have a good look at the bottom of Treylya and get a couple of coats of anti-fouling paint on her.

I picked Ryan up from the airport just after midnight on the 25th and we headed back to Treylya for the night.  The haul-out is scheduled at 7am on the 26th (the first haul-out of the day) so I’ll bring Treylya over to Canoe Cove and tie up at the loading dock tomorrow afternoon so that we’re ready for the morning haul-out on the 26th.

We slept in, picked up a few supplies and cast off en-route to Canoe Cove.  There’s a gnarly rock at the end of D dock which I was a little concerned about but it ended up being enough room to squeeze by as we made our way to the loading dock.

Ryan and I had a few drinks and enjoyed a cigar at the loading dock.  There was a sign posted on the dock which stated that there was no overnight moorage but this is where we were told to tie up so we assumed we were fine.

Next morning the guys had the lift ready to go at 7:00am sharp and they lifted Treylya out of the water, pressure washed the hull and moved her into her new home for the next few days.  It was very impressive to watch Treylya being lifted out of the water with such ease.  The lift operators really knew what they were doing and made it look easy.  Treylya (at 34 feet) is small compared to some of the mega yachts that come out so I’m sure it doesn’t put much strain on the equipment.

Canoe Cove (http://www.canoecovemarina.com/) is a great little, one stop, full-service marina where you can get supplies and a wide range of services.  There’s a nice little restaurant with warm lunches and cold beer and a chandlery where we were able to get most supplies (wax, cleaners, zincs, rags, pads, etc) we needed.  I needed some Volvo specific parts for the engine and they were able to order in what I needed and have it delivered the next day. 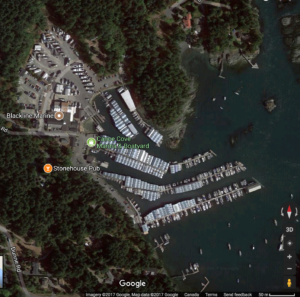 An old friend, Cameron Fraser, came over to give us a hand and we spent the next few days washing, sanding, grinding, painting and waxing the hull and after several days of work and elbow grease Treylya was looking great…  They were long days and we’d sleep at the yard but in the end it was worth it.  It was really nice to see the transformation as she went from a dirty, tired looking vessel to clean and shiny looking.  What a good feeling.

After a few days of scrubbing and preping the hull it was time to repaint.  I went with a high quality paint called Interlux MicronCSC.  It’s a little more expensive but it suppose to be better  quality so we’ll see how it holds up…

I fitted new zincs to the Rudder and Keel and we were ready to put her back in the water on April 28th.

It was a fun few days and Treylya is looking great.  Job well done boys…  Hope everyone is as enthusiastic about the job next year…